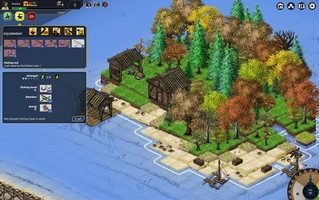 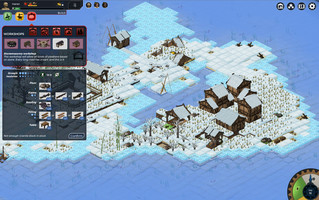 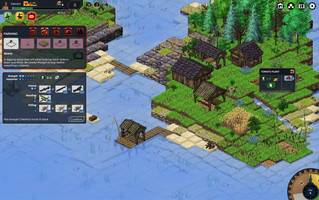 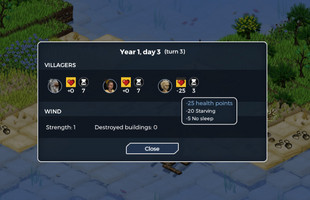 It was a long work, but it was needed! UI is now smaller, easier to use, with some additions like a report panel at the end of each turn, giving you more information about the well being of your survivors.

We also reworked keyboard shortcuts, take a look if you like to use the keyboard rather than the mouse.

Finally, shells respawn! A reproduction behaviour has been implemented: once a year, every shell “breeds”: it produces another shell, giving there is space on its natural environment, and there are not too many other shells around.

The same behaviour is used for crabs and frogs, two new animals that offer new sources of food.

You no longer need to place stockpiles before harvesting resources. Items will simply stay on the map, clearly identified by a white outline. Next step is to add proper warehouses to store all those items and protect them from the storms.

Now, Snow only appear on higher parts of the islands on the first day of winter. On the second day, it covers more land. On the third day, ice forms on the coast. On the fourth day, ice recedes, kind of announcing spring is close.

We're also proud to announce we're working with Red Bricks (https://redbricks.games/) to improve our community link! You can now submit features, bugs and others directly here!

All of this was made possible because Seeds of Resilience is now published by Goblinz Studio. We're all french people trying to make good indie games. Goblinz has been putting money & efforts to bring more quality & marketing to Seeds of Resilience!

Get Seeds of Resilience

Build your village and survive against the storms